Proto-Europoids, Anthropometry and all that fun stuff

If I do have any readers left...good lord! Has it really been a month since I've last posted? The last semester of school was especially brutal to me, seeing as how I appear to have some severe Organic Chemistry-related learning disability. Thank goodness that isn't the measure of the man or I'd be regarded as some gibbering abomination dwelling in the attic that would best be killed by fire. But it isn't. To segway into my topic perhaps a bit prematurely, I could say that perhaps there are many other things that a man is unfairly measured by. Measurements of the head and the neat classification of people into very specific categories (e.g. Armenoid, Pontic Mediterranean) was quite fashionable and mainstream in decades past, but has since been pushed out of the spotlight by genetic testing. I'm not saying that looking at skull characteristics is an unscientific practice per se, it can be used to study individuals when genetic testing is unavailable (such as the Kenniwick man). However, craniofacial studies and anything measuring and separating people can be twisted for racists use with startling ease. What is written in some of the old books is startling by today's standards, but it is no surprise that the Internet preserves these relics. With the passions in this field perhaps I don't quite know what I'm getting into here. Oh well.

The website that initially re-prompted my interesting in this topic was the Anthropological Research Page by Dienekes Pontikos. The site mostly covers Greek anthropology (shocking!) and claims not to have any overt bias against other peoples. I won't discuss the rest of the content of the website (on this post at least), but what initially got my attention were the purported Anthropometric, Racial, and Black or White calculators. These did require a lot of measurements, and some were vague, but I should have at least gotten ballpark figures. I re-checked them using photographs with un-vague points of reference too. What was surprising to me was that on the "Black or White" test I was classified as having a 100% chance of being "Negroid"! Despite roughly 85% of my ancestry not being officially known; judging by location, appearance, surnames, et cetera, they're undoubtedly almost entirely (probably entirely) Northern/Western European. Hmm. I changed my minimum frontal value from 130 to 110 mm (since it was vague without a skull) and sure enough I suddenly became 100% "Caucasian". Huh? Is that all race hinders on, or was it some loophole in the system? The Anthropometric calculator, which used to most measurements, found me to be "Slovenian" (close enough I suppose), but almost put me rather close to Japanese. A little odd. But what I found to be most interesting was the "Racial Analysis" for...Caucasian males only? It seems rather remarkable that people could be so sub-divided and that I am a "Proto-Europoid", whatever the heck that is. 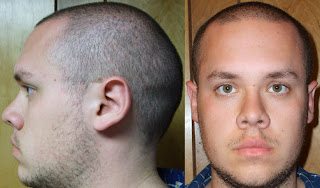 Being recently bald, I couldn't resist but take my own anthropometric-looking pictures. My head seems pretty blocky and longer that usual and I do indeed have difficulty cramming it into hats.


According to the Caucasian Metric Types page containing all the possible answers, "Proto-Europoids" have basically just big, average-looking heads. Apparently this is a "race" that lived in Europe before some Indo-Europeans came over and infused with them. So how can this phenotype possibly be considered a race? Instead of proposing relic pockets of these and different races in Europe, wouldn't it just make more sense if this is just a normal part of human variation and does not represent a "type" at all? When people look at their genealogies, they don't seem to realize how many ancestors they have, it grows exponentially after all. Unless you're severely inbred, if you go back far enough your ancestors are going to be a pretty diverse group of thousands of people. And you'll undoubtedly share many of these ancestors with many people you'd consider a different "sub-race" or perhaps even race. Of course Europeans look different and you can probably tell which region came from, but I find this classification scheme more than a little far-fetched. And so do most modern Anthropologists as this scheme is no longer accepted today. With the advent of genetics, it is pretty obvious that there is no big connection with the overall genotype and a phenotype controlled by only a few genes.

So then of course, why on earth would this classification system get proposed and even become stylish at one point of time? When these people separated European races, it was mostly for separating the Nordic people from the rest of the population. I recall reading one old book back at college which rambled on about how culturally important Vikings were, while also admitting that they really didn't do too much. It really came across as desperate pleading more than anything, and I'm amazed that it got printed in a scientific book. After reading thousands of pages of letters by H. P. Lovecraft it became readily apparent that one of the man's greatest flaws was his extreme racism. It did allow me an opportunity to see into the mind of one of those people and made me understand why he would so openly embrace this ideology. He was simply a proud person and extremely insecure about his physical frailty, so he imagined himself to be descended from mighty warriors and noble Romans (given his dark features). When he found a Welsh ancestor he was a little freaked out. Even modern-day white supremacists aren't that bad. Fortunately he eventually did get more accepting, but the racism was still always there.

This sort of extreme racism even against other Europeans has died out, but I still think the causes for this have not gone away. People just want to feel superior to one another and find some way to separate them from others. The idea of appearance determining intelligence or "goodness" is silly, but some people truly did believe it and use it as an emotional crutch. PZ Myers on his Pharyngula blog wrote a fascinating post about how the science fiction concept of generations getting stupider and stupider has much to do with this same mindset. That post is definitely much more recommended and important than this one.

Racism is too big a topic to cover with one post, so undoubtedly if I come across any more interesting (e.g. depressing) material I'll probably post on it. But now, it's time to move on to more familiar territory.

-Cameron
Posted by Cameron McCormick at Monday, May 14, 2007
Email ThisBlogThis!Share to TwitterShare to FacebookShare to Pinterest

Here’s an interesting note about skulls. The differences in skull shapes used to be used to promote racism. They would have a picture of a Greek statue and show its skull and show an African skull and a gorilla skull. So not only have skulls been used to determine race, but also to justify racism. On the same note there is a movie called “Rabbit Proof Fence” which concerns the Australian colonists wanting to eliminate the “second-caste” who are people with one European ancestor and one Aborigine. They locked up those people and forced them into only marrying white people. Thinking that all of the aborigine can be wiped out in three generations.

All in all this was a very interesting blog, however I would have to recommed a DNA test over any skull measurements if you want to find out your ancestory.