I hate having to get my Zoological and Paleontological news from the media. Half of the time the fact-checking and quoting is quite dubious, and the story is half complete at best. But worst of all is how dang after-the-fact all of these stories are. Scientists have been working on these things for years, and people like Darren Naish (I pimp his blog at every opportunity) can refer to this unpublished work and make me look quite the fool! But even from my humble vantage point, I know that there are numerous extinct and extant animals which are curiously out of the public consciousness. They're pretty much in plain sight (i.e. in books), but perhaps a little rare. All they need is a recent specimen, a catchy common name, perhaps some "Godzillafication" and bam! you got yourself 15 minutes of fame and probably more opportunities for funding.

I first heard about Mesonychoteuthis from Richard Ellis's book Monsters of the Sea some time in the late 90's and was utterly utterly baffled at why nobody was talking about this creature. That book actually was a major changing point for my interests, and I'm going to have to write a tribute to it soon here. Very little was known about Mesonychoteuthis, but what was known sounded absolutely astounding. It was extremely large, by far the largest member of the gelatinous cranchid squids and the only one with swiveling tentacle and arm hooks. For those of you unfamiliar with Teuthology (the study of cephalopods (squid, octopuses, cuttlefish, vampire squid, nautiloids)), the presence of arm hooks is quite bizarre. The trait is typical of the extinct Belemnites, squid-like creatures with 10 even arms, but does show up randomly in a few other genera of extant squid as well. I don't know if they're homologous or some sort of bizarre re-evolution.

Another book, There are Giant in the Sea by Michael Bright also mentions this species, and makes some astounding claims. His book is without proper citations, but these appear to be based off of personal communications. I take it with a pinch of salt, but it still is quite tantalizing:

The largest specimen found in Antarctic waters, according to Malcolm Clarke, was a specimen of the gelatinous cranchid Mesonychoteuthis hamiltoni taken from the stomach of a sperm whale; it had a body length, excluding tentacles, of 3.5m (11ft 6in). Clarke says that other larger specimens were taken by the British research ship Southern Harvester during its cruise in the Bellingshausen Sea in 1955-6. One example, which was sent in formalin to the British Museum (Natural History) in London, has a body length of 3m (9ft 10in), and Dr Anna Bidder, of Cambridge University, has a section of pen from a Mesonychoteuthis that suggests a body length of 5m (16ft 5in). And there might be even bigger ones.

This pdf of giant squid (and things initially confused for them) sizes mentions specimens 12m (4o foot) and 10m (32 foot) in length taken in from Sperm Whale stomachs in 1956/67, but the fact that the sources are in Russian probably indicates that this wasn't from the British. Since I can't find Bright's information anywhere else, I really can't help but wonder if he misheard/misinterpreted some evidence somewhere along the line, perhaps confusing mantle length, entire length (tentacles to end of body), and whole length (arms to end of body) for the last specimen. The other sizes are quite believable, only that I can't find references to them outside of Bright. He also relates a tale of a gigantic brown squid seen in the Ross Sea by the Soviets in December 1964 with arms a meter thick...certainly bigger than even a 5 meter mantle length squid, but Mesonychoteuthis is red (I don't know if it can change to brown though), and I'd bet that the story was greatly exaggerated if it ever happened. He also has a stories of a 100 foot squid with hooks for tentacle clubs that was seen, and another that beached (by the first witness's son, hmm), but this is quite fantastic and the lack of sources is troublesome...especially for such an otherwise incredulous book. But let's detach from the fringe here, I'll leave that for another day.

The Tree of Life website acknowledges that this species does in fact reach over 2 meters in mantle length, and Richard Ellis's later book Encyclopedia of the Sea (copyright 2000) comments that the body may be as large or larger than that of Architeuthis, the giant squid. What?! So 7 years ago somebody realized there was a species bigger than the giant squid? Suffice to say, this didn't receive much notice. There have been reports of giant squid with mantle lengths up to 6 m (20 feet) such as the Thimble Tickle Bay, Newfoundland specimen of 1878 (mentioned in Guinness), but according to Steve O'Shea the largest recent giant squid has a mantle length of "only" 2.25 meters (7'5"). Perhaps I should do another post on those super-gigantic squids reported from time to time when I'm in a fringe-y mood. But at the previous link, you will see that O'Shea has estimated that the Mesonychoteuthis mantle may reach as much as 4 meters (13 feet), making this specimen much more massive yet overall shorter than an Architeuthis.

So how did Mesonychoteuthis get into the limelight anyways? You might remember that all the way back in 2003 that a sub-adult female was discovered, which burst the dam and finally caused the long overdue media frenzy. Dr. Steve O'Shea, had his recent specimen, a catchy name (Colossal Squid), and even some "Gozdallification" e.g. claims of very aggressive behavior for the species courtesy of Kat Bolstad. It was touted as the second complete specimen after a slightly smaller specimen caught by a Soviet trawl in 1981 and was quite certainly the most studied specimen. The 2003 specimen was around 6 meters (20 feet) total with a 2.5 meter (8 foot) mantle compared with 5.1 meters (17 feet) and 2.42 meters (<8) style="font-style: italic;">Architeuthis, Taningia). In 2005 another 5 meter (16 foot) whole length animal was captured, but this isn't why the blog got written; the specimens this year so far have been quite newsworthy. You heard me, plural. The first was observed by a fishing vessel on January 8th, and while it doesn't appear any of it was saved, it was photographed alive. And it was huge with 10-14 foot/3-4 meter mantle. See the ever helpful Tomno website for more information. Another vessel fishing for Patagonian toothfish actually caught one of the Colossal Squids on February 22, 2007, and the news stories have been confused to some degree. The measured specimen was around 10 meters (33 feet) long and nearly 1000 pounds, making it the most massive squid accurately meaured and double the weight of the largest Architeuthis. Here is a link for those of you who have (somehow) not managed to come across this story yet.

Despite this basically being confirmed old information, the news is still impressive nonetheless. Funny how nothing is heard from this squid in a while, and then all the sudden a lot of discoveries were made. Was it just too obscure and generally ignored when it was seen or captured beforehand? I have the feeling this is far from the last we'll be hearing of our friend Mesonychoteuthis. I'll be checking around to find any more obscure and amazing species that have eluded popular detection...maybe I can make a name for myself yet! Nah, they'll have too much fun lampooning a character like me if I ever get in the limelight.

Well, I had my wisdom teeth removed today and suffice to say they really hurt. I'm amazed I've written as much as I have.

Well, I've attempted some illustrations of the squid (noticeably lacking online) which are hopefully somewhat accurate. They're based off of pictures from the two recent adult specimens with some juvenile features used to fill in the gaps. 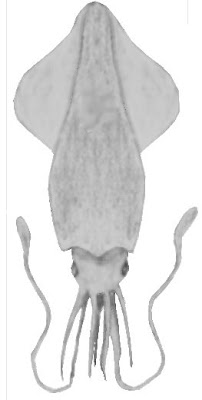 An impression of a fully mature adult. The fin shape for adults appears to be somewhat different, although this is somewhat speculative. 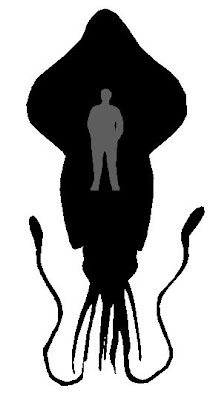 A Colossal Squid with a 4 meter mantle compared with a puny 1.74 meter human.

Finally! A pretty decent article on the Colossal Squid. Very interestingly, the initial impression of the coloration was that it was brown, hmm. Apparently the same boat found a 20 foot Mesonychoteuthis in 2003, but I'm not sure if this is the same as O'Shea's or not. I guess it would hint that perhaps it is more commonly caught than what is though, it is just rather rare. It is interesting that O'Shea claimed the scientific community rejected his claim of the Colossal Squid growing up to 1000 pounds; given the history and the huge sub-adult, those must have been some incredibly ignorant scientists. Despite claims of its ferocity, the hooked squid was also claimed to be rather docile, so either it was dying or claims of its behavior have been exaggerated. I'm also somewhat surprised by O'Shea's claim that the Colossal Squid is "one of the stupidest creatures in the sea". He also estimates that they can grow up to an entire ton. Oh yes, and there is also a better size comparison that mine. Dang.

[Addendum 7/15/07: Bright's source the Guinness Book of Animal Facts and Feats was the source for his Mesonychoteuthis information. Here it is in full with mistakes mercilessly pointed out (page 191):

Some of the squids found in the rich feeding-grounds of the Antarctic Ocean also reach an impressive size. The largest cephalopod discovered so far in these waters is the gelatinous cranchid (sic) Mesonychoteuthis hamiltoni, which has been measured up to 3.1 m 11 ft 6in in length excluding the tentacles but Clarke (1966) say this size was exceeded by other individuals collected by the British research vessel Southern Harvester in the Bellingshausen Sea in 1955-56. One outsized (sic) example was preserved in a tank of formalin at the British Museum has a mantle length of c. 3 m 9 ft 10 in, but Dr. Anna M Bidder (pers. comm.) of the Department of Zoology at Cambridge University, possesses a transverse slice of the pen of another Mesonychoteuthis which, judging by its width, must have come from a cranchid (sic) measuring at least 5, 16 ft 5 in in mantle length. The only source for these active swimmers, incidentally, is the digestive tracts of captured sperm whales!]
Posted by Cameron McCormick at Monday, March 05, 2007
Email ThisBlogThis!Share to TwitterShare to FacebookShare to Pinterest

I for one hate anything having to do with the media, creepy blood-suckers of society.

An all-together interesting blog, I'm amazed you could write that much while suffering from the lack of wisdom teeth.

I think there should be a move in the media to report of ridiculously tiny things, or really ugly things, the sort of thing that you don't here about often. You don't have to be a grotesque giant to get attention! Although it does seem to help.